GENERATION SEB. WE WANT THE GOOD FOOD AND WE WANT IT FAST! 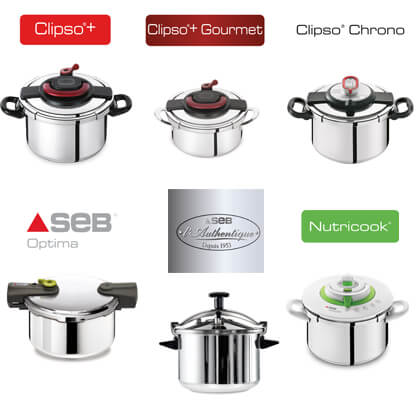 In 60 years, the pressure cooker has been continually adapted and equipped with new features to make cooking faster, easier, and better. A character in its own right, it has played a role in history. Let’s take a look at this mythic journey.

The 50s: The Super-Cocotte years

The Super-Cocotte first appeared in 1953. It revolutionized day-to-day living for mothers everywhere, providing tasty and cost effective cooking. It also helped to save time, freeing women to head out and conquer the working world.

The 60s: The Stainless steel years

The pressure cooker is now synonymous with SEB. The Super-Cocotte has won over all of France, taking its place in Formica kitchens either in its aluminium form or in stainless steel.

The pressure cooker gets colourful, lacquered in red, orange, and even bringing flowers into the kitchen. The Cocotte-Minute® is fast, apace with women’s progress in the workplace. Its practicality makes it synonymous with energy saving.

The 80s: The speed years

“L’ultracuiseur Sensor®” (Sensor Pressure Cooker) took its place in the kitchen between the microwave and the fridge. The pressure cooker is now bayonet style, an opening style popular amongst Europeans; the pressure cooker has been international for many years.

As modern as ever
For its anniversary, the pressure cooker once again shakes up the rules and reinvents Good Fast Food with three “trad-innovative” recipes at the heart of a 100% digital media plan:
– 3 recipe videos: “BourguiBurger”, “Chicken Basquaise”, and “Lamb Wrap”;

– Almost 400,000 views on https://www.facebook.com/SebFrance ;
– 125,000 visitors on www.seb.fr ;
– And hundreds and thousands of opinions gathered through television-on-demand sites and cooking sites.
This initiative was widely featured, and will continue to be throughout the year, in the media and in-store through numerous activities, cooking workshops or special events.