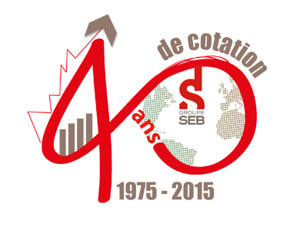 On 27 May 1975, SEB was listed on the Paris Stock Exchange for the first time. 40 years later, Groupe SEB is celebrating this anniversary.

The SEB share was listed on the Paris Stock Exchange for the first time on 27 May 1975, six years after the Moulinex share, at a price of 625 francs (€5.78* in today’s money). 21% of the capital was listed at the time, with the remaining 79% being held by the founding family and a few other shareholders.

In 1975, Frédéric and Henri Lescure were managing the Group and sales represented €140 million, 76% of which were made in France, under three brands, Seb, Calor and Tefal. The Group had 8,400 employees at the time.

Already present in the United States, Japan and the Middle East, Groupe SEB sold its products through a network of 50,000 points of sale worldwide. Even then it was already a top-seller worldwide, in Europe and in France, of pressure cookers, non-stick cookware, electric fryers and irons. The flagship products at the time included pressure cookers, coffee machines, electric yoghurt makers, irons, raclette machines – the first in a range of informal meal appliances, as well as Tefal frying pans, toasters and electric epilators. 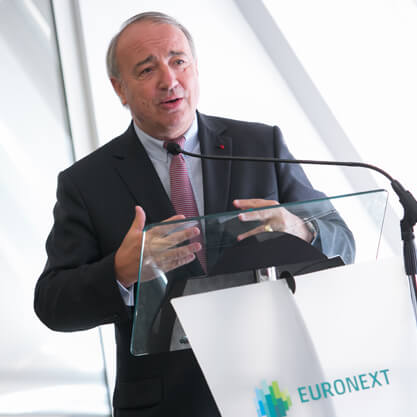 40 years later, the Group’s sales have reached €4,253 billion, 16% of which take place in France and 84% worldwide, and the total number of employees is close to 25,800 all over the world. As for the stock exchange price, this has increased 15-fold and is now in excess of €80.

An anniversary makes noise at Euronext

To mark the anniversary of the share listing on 27 May, Groupe SEB was hosted by Euronext in Paris for an opening ceremony of the European financial markets.

After a countdown of the last 10 seconds to 9 am, Thierry de La Tour d’Artaise, Chairman and CEO of Groupe SEB, rang the legendary bell, which – right from the start and into the digital age – opens and closes the financial markets.

The ceremony was an opportunity for Thierry de La Tour d’Artaise to look back on the day Groupe SEB went public and to trace the main stages of its development over the past 40 years, thanking shareholders for their confidence and employees for their contribution and involvement.

Watch the video of the financial markets opening ceremony: