NEW HEAD OFFICE, A SITE FOCUSED ON THE FUTURE 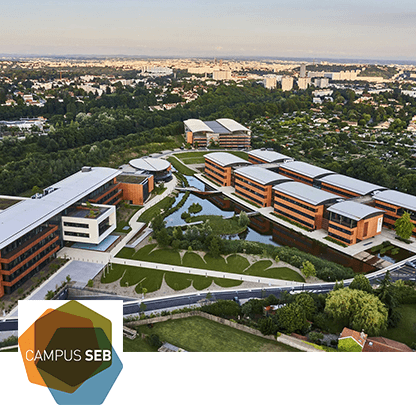 After 40 years at the historic 4M head office site in Écully, Groupe SEB established its new global headquarters in March 2016 in a brand new architectural complex, Campus SEB, which brings together all the teams in the Lyon region.

The Lyon basin has long been a strong centre of activity for the Group, with the global headquarters established in Écully shortly after SEB S.A.’s stock exchange listing in 1975 and the Calor, Groupe SEB France and Groupe SEB Retail entities based in central Lyon.

The Group’s rapid development since the early 2000s led management to review the global locations of its teams in response both to the growth in staffing and to the increasing needs for synergies between the branches of the business, while simultaneously modernising its infrastructure. Campus SEB (formerly known as “Parc Mail”) was created within the Greater Lyon western economic hub in 2005, when the first buildings were constructed. The site gradually expanded with the arrival of the IT, Accounting and Finance, Procurement and Logistics divisions, followed in 2013 by the French Market teams and the Products & Innovation Division (Home and Personal Care). All the teams at head office moved to Campus SEB in March 2016, and the site now houses over 1,000 employees.

Covering a 6-hectare site, Campus SEB is organised around a set of modern, innovative tertiary buildings designed to support the staff’s professional efficiency and improve their quality of life. A major focus of the work concerned spatial layout and workstation comfort, with the creation of open offices, collaborative workspaces, concentration areas and a large number of meeting rooms equipped with video conferencing facilities and multimedia tools. The Campus also has a 290-seat auditorium for organising themed lectures, conventions etc. Campus SEB is also designed to provide as many services as possible to staff, including the presence of several catering outlets (company restaurant, bistro, brasserie, cafés), a cloakroom service, a sports hall, generous parking – and all in a pleasant landscaped environment. Finally, the site is also home to SEBLab, an experimental facility inspired by the Fab Labs that is dedicated to creativity and materialisation, and a Digital Room, which gives concrete form to the Group’s digital acceleration and enables real-time monitoring of the social networks.

… AND A SUSTAINABLE APPROACH

Campus SEB is a natural part of the Group’s commitment to responsible engagement. Right from the construction stage, the new site has followed a strict set of environmental criteria: the materials selected (longevity, recyclability…), reduced energy consumption, improved thermal performance, turf roofs, highlighting of green spaces, rainwater recovery, respect for biodiversity etc. The Group also gave preference to local partners for the construction and management of its Campus, incorporating contractual clauses on social inclusion. Communication at the site aims to empower all staff to fully appropriate this wonderful working tool, in the image of the Group’s development and values.