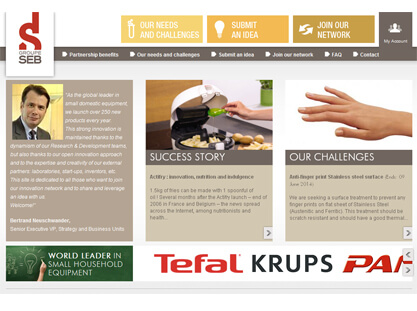 The Group’s innovation model focuses on innovation in usage and aims to provide an appropriate response to the expectations of current and future consumers. The main areas of work for our innovation community, which is made up of Research, Development, Design and Strategic Marketing teams, are directly linked with the social issues of today, such as the ageing population, health and well-being. They also involve the latest advances in current research, in particular in terms of energy sources, robotics and connected products.

In order to fuel its expertise in this field and cover a wide range of technologies and issues, the Group has been committed for several years to a proactive Open Innovation strategy, in which it has become a recognised player. Our Business Units work alongside universities and competitive clusters (Vitagora, Cap Digital etc.). Our three cross-technological centres have formed partnerships with some prestigious laboratories (CNRS, CEA-LITEN, INRA) and universities (Centrale Lyon, Insa Lyon etc.).

Set up in 2011, the SEB ALLIANCE investment company now enjoys an excellent position in the world of venture capital, examining growing numbers of cases. Investments made in 2013, for example, include Ethera, a Grenoble-based start-up company, which has developed an innovative technology in the field of interior air quality.

Finally, the Group has also opened up to the initiatives of inventors, scientists and researchers by launching a specific “Innovate with Groupe SEB” international website for them at the end of 2013.

These contributions will be organised initially at European level and subsequently at worldwide level.