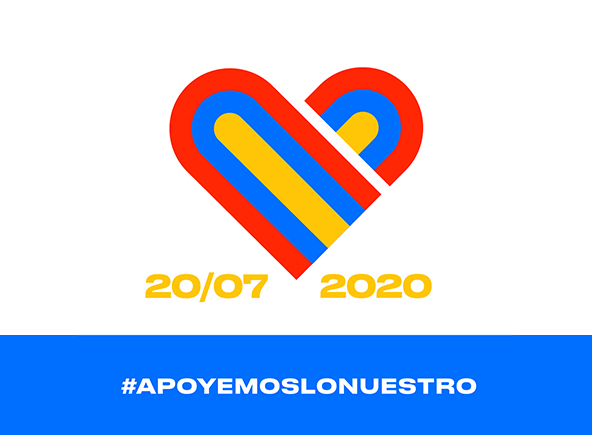 In an unprecedented event, inspired by Colombia’s Independence day celebration that took place on July 20th, both of our brands Imusa and Samurai, along with another 113 Colombian companies, joined forces to tell the country and its people: “Follow your heart: support what is ours”.

Given the current context, a great national initiative was launched to promote unity inviting all companies with local brands and production, to join forces and highlight the effort of those who, with their daily labor, contribute to the country’s growth. It became a heartfelt message that pursues awareness around the contribution of local companies and entrepreneurs to the country’s prosperity.

This movement identifies itself with a symbol that shows a heart with the colors of the country’s flag, a metaphor of optimism and hope, constantly reminding us that the best things emerge from the heart.

Imusa and Samurai are brands that have been present in the lives of the Colombian people for decades and both have great affinity with the country’s values. In addition, more than 90% of the products sold today come from local factories located in Rionegro (Antioquia) and Cajicá (Cundinamarca), providing employment to more than 900 Colombian people.

2021-01-27 - 09:00 am
Groupe SEB is expanding live streaming operations with its brands and is the first to have linked up with retail players via their sales websites. After Moulinex’s Grand Live event, Krups is launching its live shopping today, followed by Tefal’s “cooking show” scheduled on the occasion of the French “La Chandeleur” celebration (Pancake Day) on February 2nd.

ROWENTA AND KRUPS ARE OFFICIALLY “SUPERBRANDS”

2021-01-26 - 09:00 am
Our two iconic brands Rowenta and Krups, both with a long-standing tradition in Germany and a high level of trust among German consumers, were honored several times this year – including being named “Superbrands Germany 2020/2021”. Rowenta and Krups are thus among the 100 best and strongest brands in Germany that convince through their quality, reliability and customer loyalty!

2021-01-25 - 07:30 am
Groupe SEB has announced a new partnership agreement with Chefclub, the FoodTech brand which generated the strongest growth on social media worldwide in 2020, as well as the acquisition of a minority stake via its investment company, SEB Alliance.