Groupe SEB’s General Manager of its Korean subsidiary, Mrs. Kay Paeng, has been honored by the Korean Ministry for Gender Equality and Family Affairs on the occasion of the annual WCD Korea 4th Anniversary Forum.

The award recognizes those who have made significant contributions to promoting women’s rights and interests by fostering gender equality and leadership roles for women in the corporate world. Kay Paeng, first woman to become General Manager at Groupe SEB, was awarded for her contribution to creating favorable work environments for women as well as for her various actions in favor of gender equality in the workplace since she became the first woman General Manager at Groupe SEB Korea. 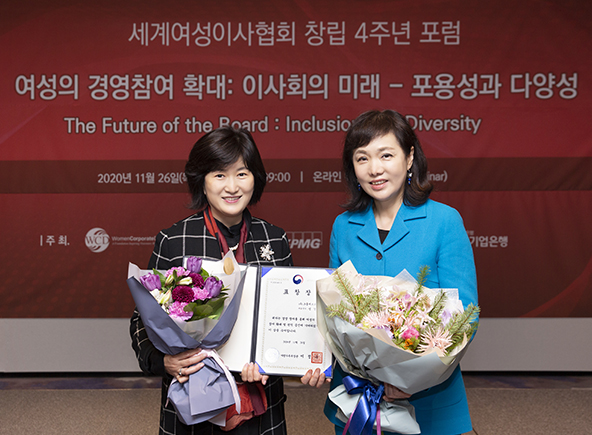 To open up leadership positions to women, Kay Paeng set up various initiatives to raise women’s awareness of career development, thereby contributing to gender equality in recruitment, as well as professional advancement and training. She also made the work/life balance a key driver to support the role of women in business. To ensure this balance, in particular, she was responsible for rolling out “The flexible working time” initiative, with employees offered flexible working hours between 8:00 a.m. and 10:00 a.m. in the morning; “Home-Cooking Day” allowing employees to leave work early on the third Friday of each month, as well as the annual “Family Day” event to celebrate families and thank employees for their commitment to the Group. Since 2018, the company has been implementing childcare coaching programs for employees with children.

At the same time, Kay Paeng has been involved in the Women Corporate Directors Foundation to develop and increase women board leaders and a mentoring program for students from the Korea Student Aid Foundation and takes part in numerous conferences on career and leadership development for women.

Kay Paeng joined Groupe SEB in 1997 as Marketing Manager for Cookware and took on various assignments in Marketing and Sales before being appointed General Manager of Groupe SEB Korea in Sept 2009.

Thierry de La Tour d’Artaise, Groupe SEB Chairman and CEO, commented: “Kay Paeng joined Groupe SEB in 1997 and her career is an example to all women. I am delighted she is part of our teams. Her commitment is today recognized by the Korean government at a time when the participation rate of women in the workplace is among the lowest in the OECD. The concrete actions steered by Kay Paeng form the foundations to build a world where gender equality can become a reality”.

2021-03-05 - 09:00 am
Enjoy limitless possibilities with TEFAL’s INFINIMIX blenders, which have sold very well and even reached the top of The Independent’s ranking!
Finance