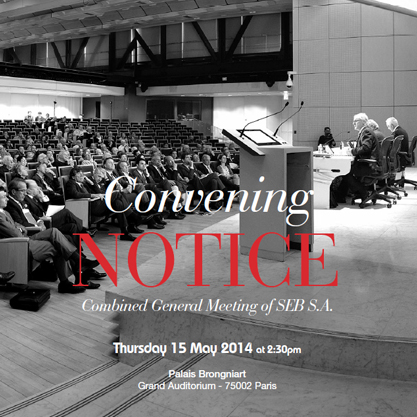 Thierry de La Tour d’Artaise, Chairman and CEO, is pleased to invite you to the Combined General Shareholders’ Meeting of SEB S.A., which is to take place on Thursday, 15 May 2014 at 2:30pm at Palais Brongniart (Grand Auditorium), Place de la Bourse, 75002 Paris.

The Annual General Meeting is the ideal opportunity for discussion and exchange of information, which is why I hope that many of you will attend. It is important for you to be able to express your views by attending the meeting personally, by voting by post, or by giving your proxy either to the Chairman of the meeting or to a person of your choice.

Approval of the 2013 company financial statements

Approval of the consolidated financial statements

Re-election, appointment and cooption of five members of the Boardof Directors

Authorisation for the company to trade in its own shares

Powers to carry out formalities

Documents can be viewed and downloaded from: www.groupeseb.com, espace Actionnaires.

The Annual General Meeting will be broadcasted live on 15 May 2014 and accessible on our website at http://www.groupeseb.com/fr/content/assemblee-generale