2011, THE MOULINEX YEAR – A SUCCESSFUL RELAUNCH 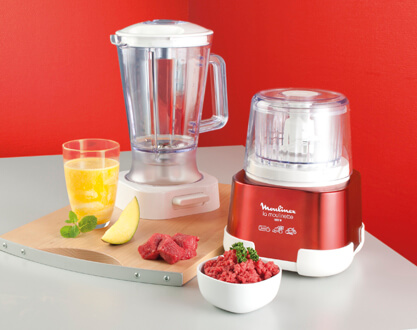 Ten years ago, Groupe SEB was obliged to sell its rights upon Moulinex in nine European countries. It could have been the chronicle of a death foretold, but 2011 has demonstrated that the brand still had a rosy future! A look back at a successful relaunch.

7 September 2001: The Moulinex-Brandt Group files for bankruptcy and is put into receivership.

28 September 2011: Groupe SEB makes an offer for a partial takeover of Moulinex-Krups.

22 October 2001: The Nanterre Commercial Court accepts Groupe SEB’s offer which, with the offer to keep 1 850 staff, the guarantee of its financing and the absence of any suspensive condition was the only one that was legally viable.

29 October 2001: Groupe SEB has the full use of the assets that it proposed to take over.

8 January 2002: The European Commission sends the dossier back to the the French Monopolies Commission in order for it to rule on the operation in France and authorises the partial takeover of Moulinex-Krups by Groupe SEB in the European Union. This authorisation is subject to a condition regarding the brand’s licence. In Germany, Austria, Belgium, the Netherlands, Denmark, Norway, Sweden, Portugal and Greece, Groupe SEB is hence required to grant an exclusive licence of the Moulinex brand for a period of five years, in order to enable the licence holders to develop their own brands through a co-branding policy. After expiry of this period, Groupe SEB – and no other stakeholder – will not be able to use the Moulinex Brand in these countries for three additional years.

5 July 2002:  The French Ministry for the Economy, Finance and Industry authorises this partial takeover.

31 October 2002: The European Commission approves the Moulinex licensee candidates proposed by Groupe SEB for the nine countries of the European Union: this includes on the one hand Saeco International Group Spa for Germany, Austria, Belgium, the Netherlands, Denmark, Norway, Sweden and Portugal and on the other, Elektrolink SA, a subsidiary of the Benrubi & Fils SA Group for Greece. These licences for the Moulinex brand were granted starting from 1 January 2003.

1 January 2011: Groupe SEB is again authorised to use the Moulinex brand. Market research to measure awareness shows that the brand is still strongly anchored in the minds of consumers.
The Group begins the relaunch process.

A strong brand, a sound reputation

After eight years of absence for a large part of Europe, the revenue and the market share of Moulinex in the licensed countries had been reduced to nothing. Nevertheless, the Moulinex brand name had remained intact and hence comprised a strong basis for its relaunch.

The Group completed numerous awareness surveys in the licensed countries to establish the positioning and the perception of the Moulinex brand in consumers’ minds. The results showed that, despite its absence from the shelves for several years, consumers have remained attached to the brand and continue to confer strong legitimacy on it in the sector of small household appliances.

In addition, these surveys made it possible to highlight a very specific brand territory – food preparation – that provides the brand with a legitimate place in the kitchen universe.

Based on this observation, the Group set in place a comprehensive strategy aimed at winning back leading positions in the licensed countries by relying on the fundamentals and the expertise of the brand in the food preparation sector. Above and beyond the relaunch, the Group decided to associate the twelve European countries where Moulinex had remained present in this challenge. For this, the Group relied on an entirely new brand platform, reasserting the strengths of Moulinex so as to find its way back onto the shelves and convince consumers who had learnt to live without it.

Reasserting the fundamentals of the brand:

The relaunch of the Moulinex brand was a major challenge for the Group’s teams. It benefitted from a wonderful creative spirit that made it possible to build a rich, innovative and energetic offer that reflects the new dynamic impetus given to the brand.

During the start-up phase in each country, the offer was built upon the heart of the range made up of 25 to 30 products. All these products are positioned at the middle-top of the range and belong to food preparation.

In the front line of this offer, the Red Ruby collection, the spearhead of the brand, that notably includes the core products such as the Fresh Express, the Moulinette, the Masterchef 8000 robot or the Click & mix hand blender.

The heart of the range is also broadened by a set of complementary products, notably in the breakfast and electrical cooking sector.

Beyond this, the Moulinex offer has been consolidated by the launch of new products, referred to as breakaway products, like the heating Soup & Co blender or the new generation breadmaker, La Fournée.

In order to make up for its prolonged absence from the shelves and to support its new brand strategy, the Group set up an innovative and ambitious communication plan in the aim of simultaneously anchoring its offer to retail clients and of winning back the hearts of consumers.

The relaunch began within the Group itself. Two “MOULINEX Days” were organised in June 2010 by the Kitchen Electrics business unit at Groupe SEB Cooking Centre in Selongey (France). It was an excellent opportunity for 30 Marketing Managers from 15 countries – including the 9 licensed countries – to share the brand’s values. On the agenda: a reminder of the strategy, the sales arguments and in particular a cookery workshop so as to fully understand and take on board the assets of the standard bearer products.

The deployment phase was then continued directly with the distributors through the organisation of large meetings with the Group’s main clients in each market to associate them with this new launch – by arousing their curiosity – and to present the target product range, the tariffs – homogenous to avoid competition between countries – and the launch package.

In addition, the Moulinex advertising and marketing machine was set in motion on behalf of the consumers. Indeed, the brand benefitted from a very wide range of communication tools: TV ads or press campaigns for example. It also deployed a wide range of communication tools directly in the stores: videos, demonstrations, counter displays, flyers and theme-based campaigns for Mother’s Day among other things. Above and beyond the standard resources, Moulinex also made its presence felt on the Web through dedicated Internet sites as in Denmark, Switzerland or Finland, but also through word of mouth or the buzz between enthusiastic bloggers for whom days were specially organised. A highly effective winning 360° approach!

A successful year for Moulinex

The approach implemented, the tremendous desire to win back market share that drove all the teams forward – business activities, brands, marketing and sales forces – and the resources deployed enabled the Group to very quickly benefit from the relaunch of Moulinex.

A year after its relaunch, the results are very positive, notably if we only take into account the licensed countries: the markets were extremely mature and competitive…and they were not waiting for us. An overall relaunch that exceeds the objectives that the Group set itself.

Across the board, stores and brands were demanding about listing an additional brand from a Group that was already powerful but the ambition and the resources implemented made it possible to make a spectacular breakthrough in food preparation, particularly in Belgium, Greece, Portugal and the Netherlands. This success was extended to new markets such as Finland, but also throughout the world, borne forward by the general dynamics of the brand. In 9 countries, Moulinex has once again become a benchmark brand thanks notably to the success achieved with major products such as Fresh Express, the Moulinette or the Masterchef robot.

The performance achieved in 2011 bears witness to the Group’s capacity to use all its assets to consolidate its positions, including in the mature countries where households are well equipped.

With this in mind, the product offensive continues notably thanks to the launch of Soup and Co, the La Fournée bread machine and the Masterchef Gourmet food preparation appliance, while awaiting new innovations that are scheduled for 2012.

At the same time, in order to boost the confidence of the retail sector and continue to gain ground in the face of competitors, the pressure will be maintained in the multimedia communication.

The Group’s teams have shown a very high level of professionalism and have risen to this exceptional challenge. They are continuing their work to guarantee the sustainable rebirth of this great brand.