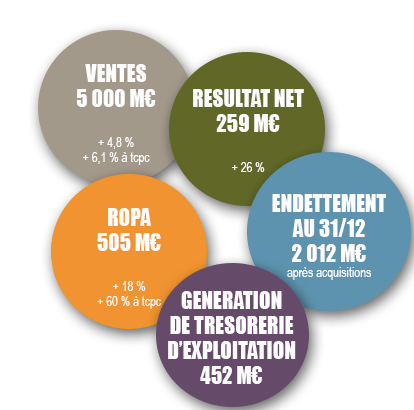 Following 2015, 2016 continued to be affected by an uncertain and mixed environment as well as forex volatility: strengthening of the dollar and the Brazilian real against the euro, depreciation of the pound sterling following the BREXIT vote, and of most of the South American currencies, the yuan, and the Turkish lira.

This performance is all the more remarkable considering the high comparatives of an excellent year in 2015 (organic growth of 8%). All our product categories contributed to this growth, with home care (vacuum cleaners), home comfort (fans, air purifiers), electrical cooking (rice cookers, electric pressure cookers and multicookers, toasters) and beverage preparation (coffee makers, kettles) achieving organic growth rates exceeding that of the Group. 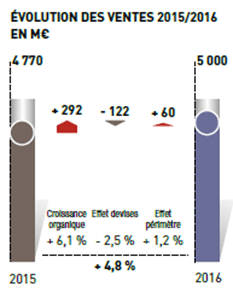 The European small electrical appliance market continued to trend positively overall in 2016, while the cookware market is slightly down year-on-year. In this context, Group sales in Western Europe increased 5.6% in 2016, including a positive effect from the consolidation of 6 months of EMSA and an extra 8 months of OBH Nordica; at constant exchange rates and scope, sales were up 3.1%.

Group sales in France came out at €780 million, up 5.5% on 2015. The fourth quarter, up 4.1%, was driven by small electrical appliances and loyalty campaigns in cookware. Major contributors to the healthy core business in 2016 included Cookeo, which confirmed its impressive success both in regular and connected versions, vacuum cleaners (cylinders, uprights and the newly launched Steam & Clean) along with the Cuisine Companion and Soup & Co cooking and heating food processors.

In the other EMEA countries, the Group recorded very strong performances in 2016, total sales for the year rose 12.7% like-for-like. This was notably the case in Poland and Southeastern Europe, where 2016 proved a record-setting year and one in which we considerably strengthened our market positions. In Russia, after two years of severe recession, organic sales growth was around the 20% mark for the year. The situation was much the same in Ukraine. In Turkey, despite the difficult environment and the continued depreciation of the Turkish lira, the Group achieved double-digit sales growth in local currency throughout the year. In the Middle East and Egypt, business activity was highly positive in 2016. In India, the Group ended the year with moderate organic growth.

The Group had something of a subdued year in North America in 2016. The 4% like-for-like decrease in sales should however be put into perspective with the high comparatives of 2015. In the United States, the downturn resulted from the combined impact of several factors: inventory clearances and stock reductions at most retailers, the development of private labels, the adaptation of the Group’s sales policy to the financial difficulties of some customers and the non-repeat of certain 2015 promotional campaigns. The slowdown was mainly due to the T-Fal core-range activity, while All-Clad enjoyed double-digit sales growth. In Canada, the Group had a contrasted year. A substantial fall in sales in the first half-year was followed by slight growth in the second. In Mexico, business activity excluding loyalty programmes was highly satisfactory.

In South America, the Group ended the year with organic growth of 1.8%. In Brazil, despite the lasting deteriorated economic context, the Group activity ultimately proved resilient, with the end of the year benefiting from better weather conditions, favorable to sales of fans, and from strong momentum in linen care. In Colombia, the year saw a growth on a like-for-like basis amid an economic environment that has nonetheless lost some of its former vitality. Major contributors to performance included blenders, pressure cookers and kitchen tools.

In China , Supor confirmed its excellent performance in the fourth quarter with organic sales growth of over 17%. The increase was driven by all cookware and kitchen tool categories and by all small kitchen electrics, apart from soy milk makers. As in 2015, growth was fueled by a strong product dynamic based on innovation, by the pursuit of territorial expansion with new increases in points of sale, and by strengthened advertising and marketing investments both in physical retail and e-commerce.

In the other Asian countries, the Group activity was robust throughout the year, underpinned by excellent performances in large mature markets, which more than offset declines in a few emerging countries. In Japan, sales rose strongly in 2016. The lead acquired in cookware and kettles, together with the successful deployment of garment steamer models and the promising launch of the Cook4me pressure multi-cooker, led to a strengthening of our positions in the market segments concerned. In South Korea, the Group enjoyed an excellent year, posting solid increases in almost all product families, capitalizing on the switch of the Rowenta brand to the Tefal brand, and investing substantially in growth drivers. Performance was also very satisfactory in Australia. The fourth quarter also saw a turnaround in Thailand, where consumption was resurgent, and in Vietnam, where the fan season was good overall. 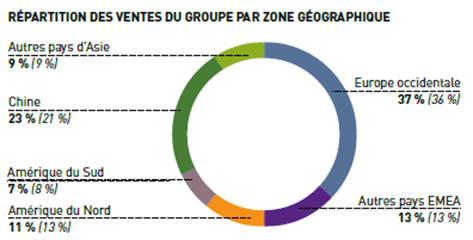 The Group reported record Operating Result from Activity (ORfA) in 2016, at €505m, up 18% on 2015. As in 2015, ORfA comprises a substantial negative currency effect of €122m, as anticipated, stemming from numerous currencies including the dollar, rouble, Turkish lira, South American currencies, pound sterling, and more recently the Egyptian pound. On a like-for-like basis, ORfA came out at €631m, up 47%, based on the following factors: 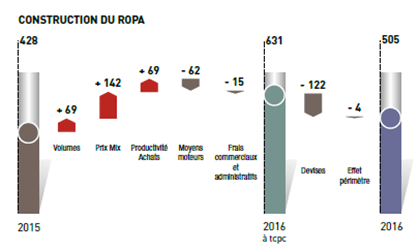 These drivers allowed Groupe SEB to largely compensate the negative currency effect on Operating Result from Activity which reached a new high of €505m in 2016, delivering an operating margin of 10.1%.

Operating profit in 2016 totaled €426m, up 15 %. At €37m, discretionary and non-discretionary profit sharing increased €5m on 2015 due to the improved results of the French entities in 2016. Other operating income and expense came out at -€42m, compared with -€25m in 2015. The increase in expenses is mainly due to two items: – costs stemming from the industrial reorganization implemented in Brazil, with the progressive transfer of small electrical appliance production from the historic São Paulo plant, now set to close, to the new Itatiaia site in the Rio de Janeiro State; – acquisition and consulting fees, together with taxes relating to the acquisitions of EMSA and WMF in 2016, totaling €15m.

Net financial expense came to -€58m, an increase of €10m on 2015, notably due to the carry of two bond issues. The increase in debt, linked to the finalization of the WMF acquisition on November 30, had a minor effect on financial expense in 2016. The rise in other financial expense resulted largely from the commitment fees involved in the implementation of financing for WMF.

Profit attributable to owners of the parent amounted to €259m, compared with €206m in 2015. The figure is net of tax, at a rate of 21%, down sharply on the 25.5% rate in 2015, thanks to the utilization of tax loss carryforwards in the United States. The total also includes the elimination of the non-controlling interests in Supor, for €32m.

At end-2016, Groupe SEB’s balance sheet integrated the acquisitions made over the year, notably those of EMSA and WMF.

Net financial debt stood at €2,019m at December 31, 2016. The total included the debt financing of acquisitions (notably WMF) for €1,655m, on the basis of an enterprise value of €1,585m, together with a €70m payment to the seller in compensation for Groupe SEB retaining WMF’s results from January 1, 2016. Following this acquisition, the balance sheet of Groupe SEB at December 31, remains healthy. The net debt to equity ratio stands at 110% and its net debt-to-adjusted pro forma EBITDA ratio, at 2.81 x, remains under 3, in line with what was announced initially. 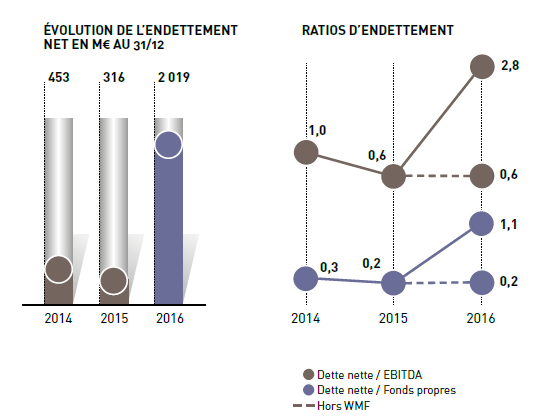 Based on the “SEB” scope alone, the Group generated record operating cashflow of €452m, reflecting further progress on the working capital requirement, which came out at 18.4% of sales compared with 21% at end-2015.

In the light of the Group’s excellent performance in 2016, the Board of Directors, meeting on February 17, 2017, decided to propose to the Annual General Meeting of May 11, 2017 the distribution of a dividend of €1.72 per share in respect of the 2016 financial year, an increase of 11.7%. For shareholders having held shares for more than 2 years, this dividend will be increased by a loyalty bonus of 10%, taking the total dividend at €1.89 (for holdings below 0.5% of the capital). 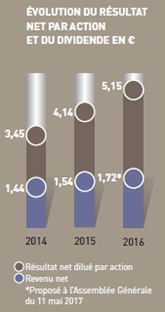 2016 has therefore been an excellent year for Groupe SEB.

For WMF, 2016 went well for professional coffee and for hotel equipment, but the consumer business in Germany was impacted by the implementation of a major supply-chain reorganization, penalizing sales and profitability. Against this backdrop, WMF delivered a 4.2% sales increase and an adjusted EBITDA of €128m, up 8.5% compared with 2015.

2017 will be a year in which the Group changes dimension with the integration of WMF on January 1.

In an economic and monetary environment that remains uncertain, Groupe SEB is aiming for further organic sales growth and a new increase in its Operating Result from Activity, in its former 2016 scope as well as in its new configuration. The Group also confirms that the consolidation of WMF should be accretive by over 20% – before the impact of the purchase price allocation* – on earnings per share as of 2017.

* in particular revaluation of inventories – which will exceptionally reduce by €14m the results reported in 2017 – and possible amortization of intangible assets.