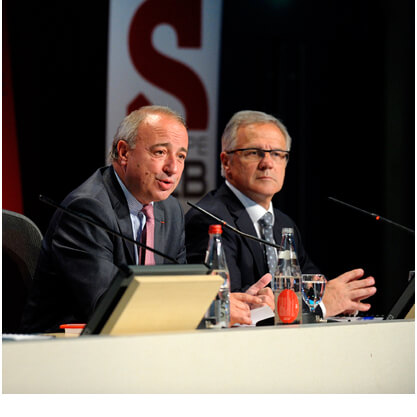 SEB SA’s Annual General Meeting was held on last May 10th in Paris, chaired by Thierry de La Tour d’Artaise, Chairman and CEO. At the meeting, the economic and financial results were presented, commented on by Jean-Pierre Lac, Senior Executive Vice-President, Finance. There were also more detailed presentations on product dynamics (by Bertrand Neuschwander, Senior Executive Vice President-Business Units) – and on the performance of Chinese company Supor. These presentations gave rise to a debate rich in exchange and a vote on the resolutions put to the meeting.

Having gotten off to a good start, the economic climate toughened in the second half of the financial year, particularly in the fourth quarter due to the crisis in Europe, with a sharp slowdown in consumer demand and markets becoming increasingly competitive and promotion orientated. Currency volatility remained a concern and the cost of raw materials rose, forcing us to raise prices to maintain profitability. We did, nonetheless, carry out some promotional campaigns in the most promising markets.

In this difficult context, and despite a challenging basis of comparison, sales witnessed strong growth of 6.9% at constant scope and exchange rates, fuelled for the most part by emerging countries. Turnover in 2011 was in the region of €4 million, our highest turnover to date. Operating profit, benefiting from volume trends, increased on an absolute value basis, reaching €453 million despite the negative impact of purchase prices and currency appreciation. The operating margin witnessed a slight decline from 12 to 11.4%, due to faster growth in new economies where we are investing heavily to capture market share.

Our level of debt naturally increased given acquisitions carried out in 2011. Ratios remained extremely satisfactory, affording the group great financial flexibility. Our funding structure was further optimized through the issuance of our first bond loan, which diversified our sources of funding and extended the maturity of the debt.

The Group took several initiatives in 2011 to support growth and reinforce its global leadership.

European relaunch of Moulinex. The recovery of the 9 European markets (Portugal, Greece, Belgium, the Netherlands, Germany, Austria, Scandinavia), from which the Brussels Commission had excluded the brand since 2002, not only generated turnover of €35 million, exceeding expectations, but also significant market share gains (+6 points across the 9 markets. The success of this relaunch was made possible by an attractive offer of culinary preparation products, a field in which Moulinex is renowned.

Investment in innovation. The creation of SEB Alliance is a strong sign of Group openness to new sources of invention, investing in small companies with strong technological content. With capital of €30m, this company has already carried out significant investments such as Key Ingredient, Technocom 2 and Cathay Capital II having studied around 80 applications between 2011 and 2012.

Acquisitions in new economies. Following the acquisition of Columbian cookware leader Imusa in February, we have implemented a very dynamic integration plan. From September, the company introduced its first ranges of small electrical appliances, complementary to those sold under the Samurai brand. This deployment in a rapidly growing market is promising for the Group’s future in this region (2011 Imusa pro forma sales: €120m).

In Vietnam, takeover of Asia Fan, of a 65% stake, was carried out in May. The company has a turnover of around €10m, and is a specialist in ventilators – an emblematic small electrical appliances product in Southeast Asia – with a prestigious brand: AsiaVina. It is an opportunity for the Group to bolster its presence – along with Supor – in this dynamic market, thereby accelerating its development.

The last acquisition concerned India, with the takeover of 55%, of Maharaja Whiteline in December. Located in Delhi, this company has a factory with 350 employees in the North of India. It is well positioned on the spice mixer/grinder market (with a strong brand image in the country) and with a range of small electrical appliances. Furthermore, it has 22 regional offices, 19 warehouses, 330 distributors, and 26,000 sale outlets. These structures should allow us to better understand and serve this country-continent and to gain access to an enormous market with vast growth potential.

Lastly, stake increase in Supor, from 51% to 71% allows the Group to consolidate the company’s long-term development on a solid shareholding base.