In first-half 2017, in a global market which remains contrasted and in spite of ongoing political tensions and economic uncertainties, Groupe SEB recorded an excellent performance. 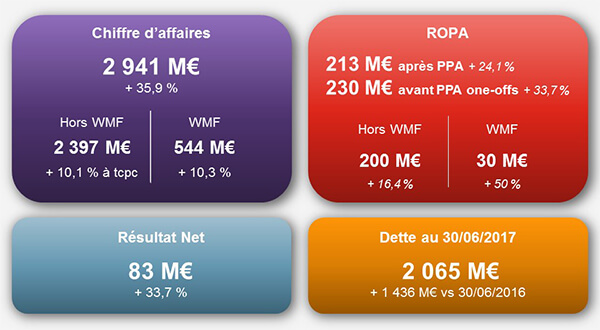 Sales came out at €2,941 million, up 36%, including organic growth of 10.1%, a positive scope effect of €587 million (EMSA and WMF, each consolidated for 6 months) and a reclassification effect of €36 million of some of Supor’s marketing spend to sales deductions, with no impact on Operating Result from Activity. The currency effect was positive at €8 million.

The 10.1% like-for-like increase in sales was fueled by all the geographical regions, the strong momentum being driven in particular by several large countries including Germany, Russia, Turkey, China, South Korea and Mexico. Following a brisk first quarter, the Group successfully maintained vigorous business activity between April and June (+8.6%). All the product lines contributed to the rapid growth in sales, the star categories being vacuum cleaners and electrical cooking. This robust growth is to be seen in the light of high comparatives, with increases of +6% and +8.7% in the first six months of 2016 and 2015 respectively.

In parallel, WMF business grew 10.3% over the period, boosted by professional coffee, while Small Domestic Equipment enjoyed a strong pick-up in the second quarter. 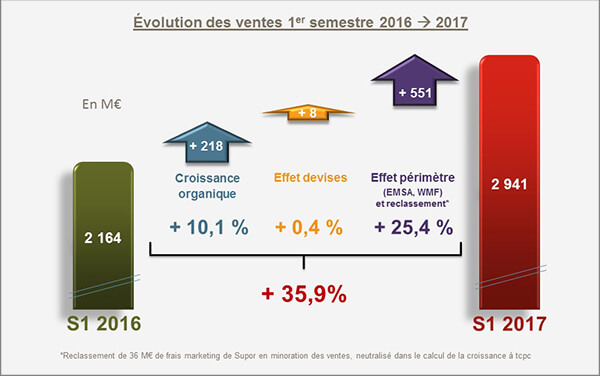 In western Europe, the Group achieved organic sales growth of 4.8% for the first half year, subsequent to a sharp acceleration. This vitality was fueled by most of the large countries, with remarkable performances in certain cases and a reinforcement of our positions in the markets, both in physical and online retail.

In France, business activity improved between April and June (+2%) while remaining contrasted per the activity. The downturn in cookware mainly resulted from the non-repeat of the 2016 loyalty programs, and small electrical appliances, where sales were very brisk. Numerous products drove this growth: vacuum cleaners (launch of the multi-function Air Force 360 handstick vacuum cleaner, success of Clean & Steam, Air Force, bagless vacuum cleaners); steam generators and irons, which made a strong recovery; fans, thanks to favorable weather conditions; new “breakfast” sets; Dolce Gusto; and automatic espresso machines. Consequently, the Group considerably outperformed the small electrical appliance market. In Germany, the Group confirmed its strong sales momentum in the second quarter, continuing to nurture product roll-out with strong initiatives in the field and large-scale advertising campaigns. In Switzerland and Austria, the start of a new Nespresso partnership led to additional revenue. In the Netherlands, the brisk business activity posted in the first quarter continued in the second, as well as Spain. In the UK, after a good start to the year, sales growth in pound sterling held up firmly despite the price increases implemented.

Of particular note, beyond organic growth, the scope effect resulting from the consolidation of EMSA in the first half-year (globally integrated as of July 1, 2016), added to Western European sales about €40 million, most of which achieved in Germany.

In the other EMEA countries, the sharp momentum of 2016 and early 2017 gathered significant pace in the second quarter, with revenue growth of nearly 18% on a like-for-like basis. In Central Europe and the Balkan countries, the markets continued to trend positively. This momentum enabled the Group to take numerous leadership positions in the countries. In Poland, business activity made a sharp recovery in the second quarter, after being negatively impacted at the start of the year by high inventory levels in retail. In Russia, the Group enjoyed an excellent second quarter and ended the first half-year with an over 20% increase in sales in roubles and further gains in market share. The robust upturn was also confirmed and heightened in Turkey. In Egypt, the Group maintained its positions, while the situation remained complicated in Saudi Arabia and in India.

In North America, the Group grew its sales in the region by 11% like-for-like in first-half 2017, substantially lower than the 20% recorded in the first quarter. After a strong start to the year in the United States, thanks to the introduction of a range of Krups kitchen electrics in over 2,000 mass-retail stores and e-commerce, the second quarter saw the initiation of the ramp-up in resale, which proved slower than expected. Generally speaking, the US market is significantly affected by the financial difficulties of several physical retail and telesales banners, whose business has been adversely impacted by the rise of e-commerce. This development has led in particular to destocking, limited orders or store closings. In Canada, the first-half recovery in sales was mainly driven by cookware and linen care, together with great performances by Actifry and OptiGrill, especially in the first few months of the year. In Mexico, organic sales growth of over 30% at end-June reflects a significant acceleration in the last three months.

In South America, , on a like-for-like basis, first-half growth came out at a little over 1%, following 3% growth in the second quarter. In Brazil, in what continues to be a complex overall environment, with lackluster consumption and a highly competitive and promotion-driven market, the Group reported a slight revenue increase despite the negative effect on volumes of price hikes implemented since the start of the year. Moreover, the transfer of small electrical appliance production to the newly constructed Itatiaia site was completed 2 months ahead of schedule and the transfer of cookware production has started. Business momentum remained strong in Argentina, unlike in Colombia, where the like-for-like revenue decrease can be attributed to fans, sales of which were negatively impacted by weather conditions.

In China the Group posted an excellent first half, achieving organic growth of over 20%, still largely driven by online sales. In a competitive and promotion-driven market that nevertheless remains highly promising, Supor’s momentum continued to be fueled by its pillars, namely cookware (frying pans, saucepans, woks, sets, kitchen utensils and thermos mugs) and small electrical appliances such as rice cookers, electric pressure cookers, kettles and high-speed blenders. In addition, the Group confirms its inroads in non kitchen electrical appliances, especially in air purifiers and garment steamers. Innovation, which nurtures Supor’s entire product offering, and in-store and online execution remain key success factors. It should be recalled that, to better reflect the nature of certain expenditure and ensure complete accounting consistency amid Group entities, a change in the accounting presentation has been implemented, whereby €36 million in marketing spend was reclassified and directly deducted from first-half sales, with no impact on Operating Result from Activity.

In other Asian countries, Group sales were up slightly at end-June on a like-for-like basis, reflecting a sharp recovery in business activity in the second quarter, despite the persistence of contrasted market situations. The main drivers of this growth were Japan and South Korea. In Japan, sales growth accelerated in the second quarter, driven by the same products as in the first few months of the year, with strong momentum in cookware, brisk growth in kitchen utensils, continued headway in garment steamers, and confirmed success for kettles, materialized by strengthened positions in the market. The 28 Group’s proprietary stores made a substantial contribution to business growth. In South Korea, the Group stepped up growth in the second quarter. The Group also posted a good half-year in Australia.

Dans les autres pays du Sud-Est asiatique, after a difficult start to the year, the situation improved slightly, but suffered in Hong Kong and Singapore from high comparatives in 2016. While business momentum remains positive in Malaysia and is trending slightly better in Thailand, it nevertheless remains disappointing in Vietnam.

WMF sales in first-half 2017 came out at €544 million, up 10.3% on first-half 2016. The total was divided evenly between Professional Business (professional coffee and hotel equipment) and Small Domestic Equipment.

In the professional segment, sales growth of 20% was fueled by strong momentum in automatic coffee machines (+27%), attributable to:

Sales were down in hotel equipment, notably due to internal reorganizations and the harmonization of IT systems.

The Consumer business (Small Domestic Equipment) made a significant pick-up in the second quarter, leading to a stable situation at June 30. The downturn in Germany, focused on cookware and stemming from the impact of the logistics reorganization carried out in 2016, is almost entirely offset by the progress made elsewhere: solid growth in Asia-Pacific, boosted by a cookware loyalty program in Taiwan and strong headway in China and South Korea; development of online sales; and a strong increase in small electrical appliance sales, the leading product being the Kult X Mix&Go blender. In addition, the traffic in WMF stores in Germany was satisfactory over the period. 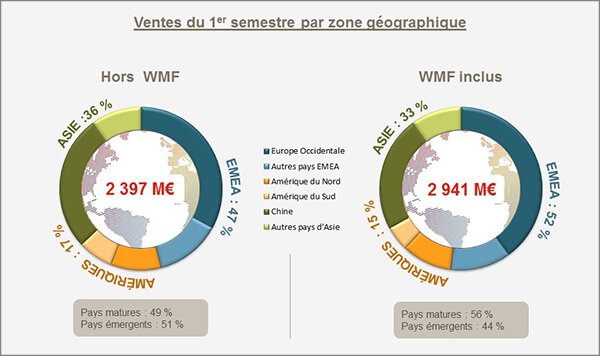 Excluding these first consolidation entries, ORfA totaled €230 million in first-half 2017. The currency effect was -€16 million, compared with -€61 million in the first six months of 2016.

Organic growth in ORfA can be broken down as follows:

As a reminder, given the seasonal nature of the Group’s business, first-half ORfA is not representative of the financial year as a whole and cannot be extrapolated. 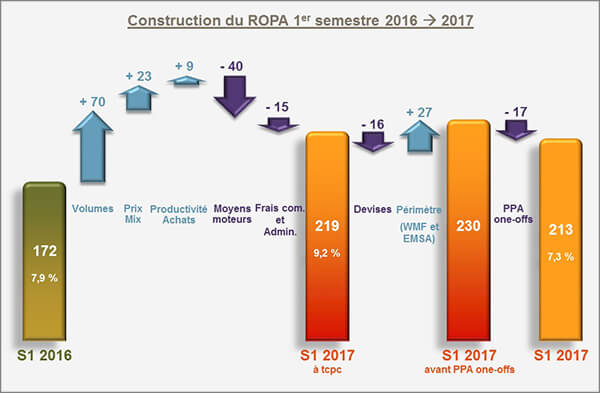 At €178 million, compared with €134 million at June 30, 2016, operating profit, in addition to the contribution of WMF and EMSA, includes various items, the variation in which merits some attention. The anticipated cost of discretionary and non-discretionary profit sharing came to €11 million, compared with €14 million in first-half 2016. Other operating income and expense, at -€24 million, is in line with the figure in first-half 2016. The total includes restructuring costs in Brazil (the closing of the Mooca site and the transfer of production to the new Itatiaia site), spendings incurred by the creation in Lyon of the Innovation Hub for the Small electrical appliance business, and provisions for expenses involved in the integration of WMF and the regrouping of Groupe SEB entities and WMF in several countries.

Net financial expense came out at -€44 million, compared with -€26 million at June 30, 2016. The change reflects the refinancing, at highly attractive conditions, of the acquisition of WMF as well as the €12 increase in the fair value of the optional part of the convertible bond issued last November.

Tangible fixed assets increased by €110 million on end-2016 owing to the valuation of the brands and the reassessment of other intangible assets, ultimately leading to a revaluation of goodwill of €180 million.

At June 30, 2017, net financial debt amounted to €2,065 million, compared with €2,019 million at end-December 2016. This change takes account of a cash flow generation of €91 million, related to the increase in cash flow and a further improvement in the working capital requirement, which stood at 17.9% of sales compared with 19% at the end of first-half 2016. It also includes non-operating items such as dividends paid (€101 million), the acquisition of Swizzz Prozzz, and cash outflows linked to the restructurings under way. 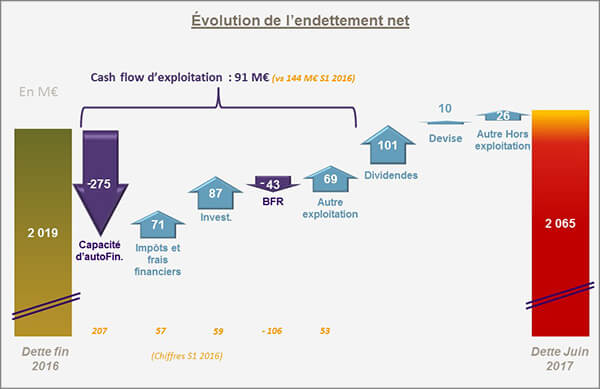 The strong performance in the first half of the year provides a robust platform for the coming months, but the Group must nevertheless remain cautious regarding macro-economic uncertainties and potential market turbulence.

In this context, and given the very high quality second half-year in 2016, the Group aims for 2017 at an organic sales growth exceeding 7% and, on the basis of current exchange rates, an increase in published revenue by more than 30%. Under these circumstances, the Operating Result from Activity, excluding one-off impacts of WMF purchase price allocation, should grow by at least 30%. The Group also confirms that the consolidation of WMF is expected to have an accretive impact of more than 20% before the impact of the purchase price allocation on net earnings per share from 2017 onwards.