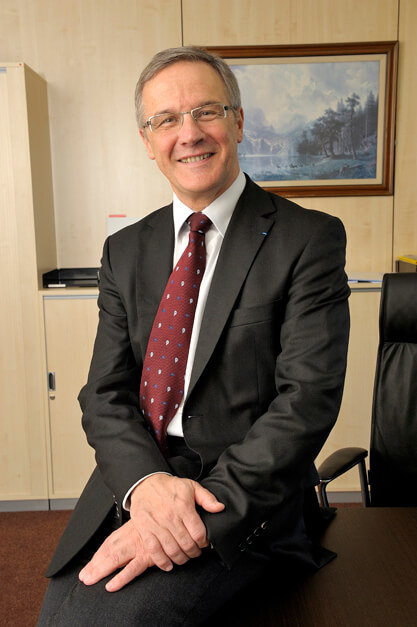 In 2011, the Group again increased its sales and improved its results compared to 2010, already an exceptional year. In the first quarter of 2012, in a difficult context and given strong prior-year comparable, the slight drop in revenue (-1.5%) on a like-for-like basis is a satisfactory performance.
The Group’s financial architecture remains healthy and strong.

2011 was not « a year of plain sailing », combining the events of the Arab Spring, the natural and industrial disasters in Japan, the rapid deterioration of the economy in Greece, Spain and Portugal, the downgrading of the American and European sovereign debt rating…These events brought about an overall climate of uncertainty in the world, leading to higher raw material prices and amplifying the volatility of exchange rates.

In this globally more different environment, Groupe SEB also had a specific challenge due to the historically high performance in 2010, which made the basis for comparison a demanding one.

Nevertheless, the Group recorded sales of almost 4 billion euros, a growth rate of 8.5% as reported and up 6.9% like-for-like, whilst ensuring a slight increase in its operating result from activity which grew by 3.5%, at €453 million. As for the net profit, it was up 6.5 %, at €235 million.

So, a satisfactory year at the end of the day ?

2011 was even a very good year for the Group despite the ups and downs due to the economic climate and the marked slowdown of the business in certain countries as of the summer. Moreover, 2011 was a year of progress, with the successful relaunch of the Moulinex brand in Europe, several acquisitions in the new economies, the launch of numerous innovative products, the creation of an investment fund – SEB Alliance -, the launch of our first bond issue…

How do you explain this steady success ?

Our strategy is clear. It is based on a long-term vision, founded on the implementation of 4 key success factors and growth drivers :innovation of course, with approximately 200 new products and models launched each year; our international development, which was once again accelerated in 2011, notably in the emerging countries that accounted for 45% of our sales ; the strength and the complementarity of our brands both from an international and local perspective ; a clear marketing approach that is segmented by distribution channel with, in particular, a significant build up of the merchant sites on the Internet. To pursue this growth strategy we must maintain our competitiveness over the time thanks to the permanent adaptation of our production facilities, active price management and strict cost control.

During more difficult times, such as the ones we are currently in, the Group’s success depends on its agility and its ability to mobilise its resources on the most dynamic markets and on products that meet consumers’ needs. Our development in the emerging countries, through internal growth as well as through the acquisitions we have made over recent years [Editor’s note: Supor in China, Imusa in Colombia, Asia Fan in Vietnam or Maharaja Whiteline in India], clearly illustrates our ambition to reinforce our presence on these rapidly expanding markets, as a complement to the mature countries, more heavily impacted by the current crises.

The first quarter was in line with the end of 2011. The slowdown in consumption observed since last summer has gained ground in those markets already in difficulty and has spread to other countries. And the context remains globally uncertain and tense. In this environment, the Group achieved an almost stable level of revenue at the end of March 2012, compared with a very vigorous first quarter in 2011 [Editor’s note: organic growth of 11.6%), This is in itself a satisfactory performance.

The geographic analysis of these sales stresses the highly contrasted nature of the business, with certain areas showing a marked decline and others resisting or even progressing. The 15% drop in the operating result from activity for the period obviously reflects the current sluggish climate. But it also refers to very high figures in the past and should not be extrapolated for the full financial year.

2012 will undoubtedly be a complicated year, but the Group is well equipped to weather this new passing crisis by capitalising on its strong fundamentals. We remain serene and confident as to our capacity to get through such periods while preparing our future.

This being said, the Group’s debt is higher…

The debt is higher, yes, but the financial structure is still comfortable. By the way , it is one of the reasons for our confidence. On 31 December 2011, the Group’s debt amounted to €673 million, up €542 million. This increase was explained mainly by the financing of the acquisitions made during the year (Imusa, Asia Fan and Maharaja Whiteline) and the purchase from the founding Su family of an additional 20% of Supor’s share capital in China. Traditionally, the Group has always been a strong generator of cash, hence over the first quarter of 2012, the debt was reduced by   88M€ - to 586 M€-. This enables us to maintain a strong and healthy balance sheet.

Moreover, we rely on a debt architecture that combines a balanced and diversified approach to our sources of financing (commercial papers, syndicated credit lines, private placement, bond issues…)..

This financial situation consequently provides us with a comfortable margin for manoeuvre for the future.

We are committed to ensuring fair remuneration to our shareholders and we apply a long-term policy. It is based on the principle of a rise in the dividend when our results allow it and stability when circumstances require it. At our next General Meeting on 10 May 2012, we are hence going to propose to distribute for the 2011 financial year a dividend of 1.25€ per share, up 6.88€.