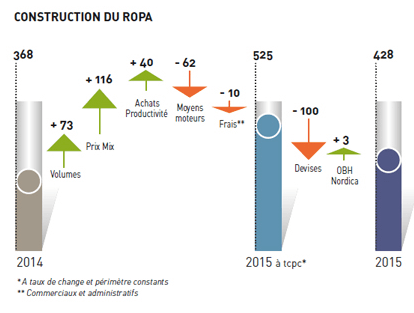 The Group generated Operating Result from Activity (ORfA) of €428 million, up €60 million (+16.3%), despite a negative currency effect of €100 million, resulting largely from the strengthening of the US dollar and Chinese yuan, the Group’s main purchasing currencies, against the euro. The depreciation of several emerging currencies, especially in the second half of the year, also contributed to the negative currency effect, though to a lesser extent. 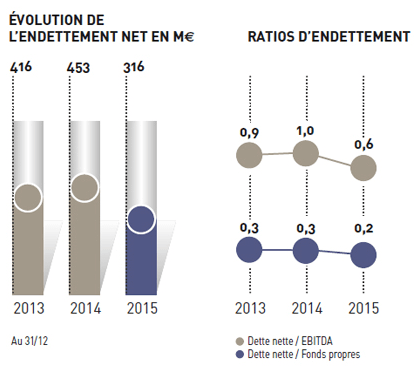 Harnessing all the above, the Group succeeded in more than offsetting the -€100 million currency impact on ORfA, which grew in a robust manner.

Operating profit totaled €371 million, up 18.4% on 2014, mainly reflecting the improvement in ORfA. Other income and expense stood at -€25 million (-€21 million in 2014), notably including costs and provisions linked to enhancing competitiveness in Brazil and to the workforce reduction plan in Lourdes.

At -€48 million, net financial expense improved slightly on 2014 (-€49 million), with a significant reduction in interest expense (-€27 million, compared with -€31 million in 2014) along with an increase in other financial expense, notably comprising unfavorable currency translation adjustments.

Consequently, net profit came to €206 million (+21.2%) after a tax expense of €82 million, corresponding to an effective tax rate of 25.5% (26.9% in 2014), and non-controlling interests of €35 million, which rose year on year as a result of the continuous improvement in Supor performance in China and the re-evaluation of the yuan.

At December 31, 2015, equity stood at €1,908 million, up €183 million year on year mainly owing to the profit generated in 2015 and positive currency adjustments worth around €50 million (with the favorable effects of the Chinese yuan and US dollar outweighing the unfavorable effects of the Brazilian real, Colombian peso and Turkish lira). Net debt at December 31, 2015 amounted to €316 million, down €137 million on last year. That substantial reduction resulted from the generation of strong operating cash flow of €257 million (€175 million in 2014). The working capital requirement increased in value due to the strong growth in business activity, but improved in ratio terms (21.0% of sales versus 22.4% at the end of 2014). The Group ended 2015 with a gearing of 17% (26% at end-2014) and a debt/EBITDA ratio of 0.6 (compared with 1.0 at December 31, 2014), further strengthening its financial structure, based on a diversified financing architecture, reinforced by the bond issue in November 2015.

Fiscal year 2015 concluded with excellent performances, both in terms of organic growth in sales and improvement in results. The first few weeks of 2016 attest to the fact that the global macro-economic environment will remain highly contrasted from one geographical region to the next. Groupe SEB expects demand to remain well oriented in Europe and in China, more subdued in the United States, and anticipates a situation which is likely to remain highly deteriorated in Russia and Brazil.

The Group also expects a continued unfavorable forex configuration in 2016, with its two main purchasing currencies, the dollar and the yuan, having appreciated considerably in 2015 – leading to less favorable hedging rates -, while several emerging currencies depreciated significantly. Together, these factors should translate into a sharply negative currency impact on revenue and on Operating Result from Activity (on which it is currently estimated at around €130-140 million). As in 2015, Groupe SEB will endeavor to more than offset these negative effects by harnessing innovation, the Group’s worldwide presence, a proactive pricing policy, strong advertising and marketing investments, together with the competitiveness and flexibility of its manufacturing base and structures. In this context, Groupe SEB’s objective in 2016 is to once again achieve organic growth in its sales and, despite an ongoing adverse currency effect, ensure a new increase in its Operating Result from Activity.