GS Bulgaria created a disruptive and innovative communication campaign for its new TEFAL loyalty program in collaboration with Fantastico, a Bulgarian food chain of stores. Its viral approach received the third place at the 2021 IAB MIXX Awards*.

Loyalty programs, which are now quite common, allow consumers to collect promotional points for each purchase and exchange them for products at lower prices. This year, GS Bulgaria joined forces with Fantastico to offer discounts of up to 50% on selected products.

The objective? Create a new communication approach that is unique and impactful. 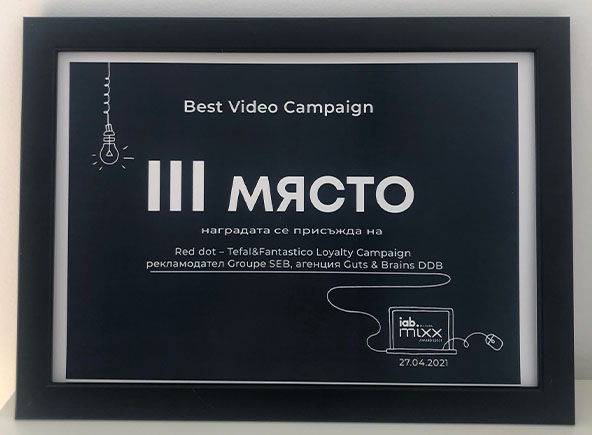 To do so, GS Bulgaria developed a new loyalty campaign with a simple and striking message by creating a cover of a pop-folk song called “Red Point,” sung by Mila Robert. The song was chosen аs the lyrics embody the collectable red point stickers and match with the red colour for Tefal and Fantastico brands. The singer, popular in the Sofia scene for her pop-folk covers with a contemporary twist, has become the face and voice of the campaign. GS Bulgaria also made a video using our brand colors to create a striking and easy-to-recognize visual identity.

The campaign was rolled out in stores and actively promoted on social networks using this same visual universe.

The campaign went viral thanks to the staff’s creativity. Bulgarian celebrities also helped generate buzz by sharing the video on their social networks. And Mila Robert, who has 16,000 followers, reached organically more than 80% of her audience! This all helped exceed the objective, and Tefal products, shown in the video, reached the top 10 in sales.
GS Bulgaria received a bronze award for the best video campaign in the 2021 IAB MIXX Awards.

*The “IAB MIXX Awards” recognize the best digital campaigns of the year. Find out more here.