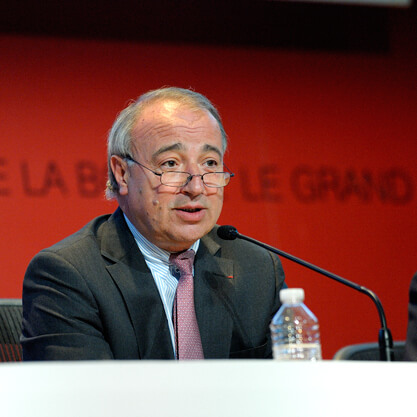 An honourable 2012 performance in the context of a global crisis

2012 was marked by a rather generalised slowdown in consumer spending and an increase in the power of e-commerce – two phenomena that resulted in a decrease in footfall in shops. Added to this were major stock reduction operations by retailers, increased promotional activity and considerable pressure on prices.

Within this strained context and considering its strong history, the Group managed to maintain an honourable performance with a slight increase in the published sales figure (+2.4%), taking us over the symbolic €4 billion mark, as well as the near stability of our sales at constant scope of consolidation and exchange rates (like-for-like), following two years of record organic growth (+9.6% in 2010, +6.9% in 2011). Our operating result from activity was down by 8.7% to €415 million. In spite of wide variations in performance according to country, the Group managed to globaly maintain its market share.
Europe in particular came under pressure, with the gradual extension of the crisis that had struck southern Europe, whilst Asia Pacific was hit by the slowdown in China. Conversely, business was brisk in North America, Russia and in South America, which saw an upturn at the end of they year.
In mature countries, Group sales were down by 2% in 2012, whilst emerging countries saw growth of 1%.

Following on from the historic high of 2011 (€455 million reprocessed according to IAS19), which was a challenging basis of comparison, the operating result from activity amounted to €415 million (-8.7% compared with 2011). Weighing heavily on our business operations, the crisis brought about a negative volume effect. Added to this was a punishing currency effect resulting from the highly negative impact on purchases of the appreciation of the Dollar and the Yuan against the Euro. These factors could not be completely compensated for by significant reductions in costs elsewhere.
Operating profit amounted to €368 million, down 8.6% in relation to the reprocessed figure for 2011. This was mainly due to an increase in profit-sharing (€48 million versus €44 million in 2011) linked to the impact of the higher “forfait social” tax in France and the Group’s matching payments under last autumn’s employee shareholder plan.
The financial result amounted to a net expense of €63 million, including an increase in the financial costs of debt (-€30 million) and an impairment charge on the shares in the company Maharaja Whiteline (-€25 million) .
Net profit amounted to €194 million, compared with €236 million in 2011.

The Group’s balance sheet is healthy and well-structured. With shareholders’ equity reaching €1.4 billion and net debt of €556 million, down by €117 million compared with 31/12/2012, the Group’s financial situation is sound.

During the first quarter of 2013, there were no major changes to business activity compared with the end of 2012. The environment has, however, become more strained in France and has remained sluggish throughout the rest of Europe. On the other hand, continuing beyond the impact of Chinese New Year in January, a gradual revival has been recorded in China and North America is also showing positive signs. In mature countries, sales were down by 2%, whilst growth of 8% was recorded in emerging markets. Operating result from activity recorded a drop of 6%, mainly due to an unfavourable geographic mix.
The key word for 2013 is still prudence. However, the Group will pursue its long-term strategy through an active product policy, targeted investments in advertising, the development of loyalty programmes with some retailers and the development of its network of own stores. The Group will also strive to boost its industrial efficiency and competitiveness, whilst maintaining tight control over costs, with a view to maintaining operating result from activity at the same level as for 2012.

See a video of the entire Annual General Meeting here.